Sour through and through. A very good buy. 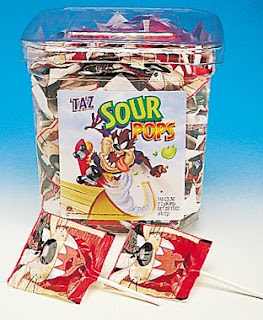 Lollipops are for kids and Kojak. I love tootsie pops actually. But in general, I’m not a sucker kind of guy. If you’re going to try and hide your love of kids’ candy from the general public, ‘pops aren’t going to help your cause.

And then I was over at Jon’s house and he was raving about a sour ‘pop he found that has a picture of the Looney Tunes Tazmanian Devil on it. (wonder if they pay WB for that…they must…)

(Thanks to CandyWarehouse for the pic. Go here to buy Taz Pops.)

Simply called “Taz Sour Pops” — these are about the size of the old “Charms” pops (remember those?) and as far as I can tell thus far, they come in red, red, and purple. I’ve only had red, saw Jon had a purple one. I think the red ones are cherry. They are your typical red-it’s-probably-cherry flavor. And I’d bet that the purple is the purple-it’s-probably-grape flavor.

(side rant: I love the grape artifish flavor but grape isn’t actually grape is it. Grape never tastes anything like grape juice or wine. Which is why kids say “it tastes like purple” and everyone laughs cuz kids are oh so gdm cute.)

But these pops aren’t about the flavor types. These are about the sour. And I think…can’t be totally positive about this but I’m pretty certain of all the sour candies I’ve had, this is the one that holds sourness from first lick to final swallow. Maybe most manufacturers put just enough lemon sugar in their candies so that folks will know it’s a sour when eating starts but then the creators hold back sour sugar from the middle parts of the candy cuz they figure no one will really care once the candy is 2/3 of the way through. Who knows…but I do know that the Taz pops keep the sour throughout the candy’s lifecycle, which felt very unique when I first started eating these.

Also – the sour isn’t crazy pucker sour. Like those yellow sour balls (…have you had those? Not sure the name. I think they are lemon jawbreakers; they are about the size of a large ball-bearing), which are so sour you kinda need to spit it out until you get a quarter way in when they just start tasting like generic candy .

The Taz Pop sour is “brighter.” Kind of wakes up the mouth, makes it feel like your whole mouth is tasting the candy, not just your tongue and taste buds. Taz Pops are also juicy. Makes your mouth water, and with the jazzy flavor that doesn’t stop even as you continue sucking — it makes these pops intensely eatable.

Bottom Line:Top notch sour pop. Sour through and through and not the annoying or pedestrian sour. This pop is alive in your mouth. So much so, if yr the type to want to suck a sucker until it’s done – you might need to bite this puppy just to quiet down the mouth for a bit.