And we’re BAAAaack!!!!!!!!
Feels like it’s been awhile.
Thanks for having me.

Man I’m way too gummi easy. I’m a slut for gummies. I’d eat gummi poop. Seriously. I’ll chow almost any gummi down even when they are super crapopotamus.

No better, clever way to jump into the reviews again than with the “um-no-I-still-don’t-really-think-of-seafood-when-I-think-of-candy” shaped gummis.

I’m pretty sure that’s the name since that’s what it says on the box: 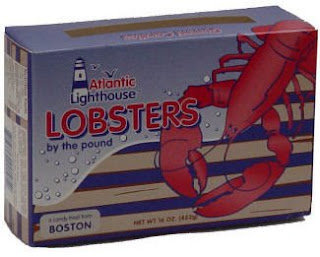 At Boston Treats or Get em at Candy Depot

What kind of name is that? “Atlantic Lighthouse Lobsters by the pound.” They know I can see it’s a box of gummies, and not a box of real lobsters. Did the candy makers think a clever thing would be to not have a candy zany name? Strike one. A better name would have been “Cran Red Lobstahs.”

Especially since they taste like cranberry. Now that’s f-ing Novel! It took me awhile to figure out the taste. Not strawberry, not cherry, not oalaberry…and then I happened on it. So kudos to Atlantic Lighthouse Lobsters by the pound for going down the road less flavored.

Sadly, I aint a fan of the cran. My mom never bought Ocean Spray when I was a kid and as an adult the only time I veer into the path of said berry is at Thanksgiving. And then it’s for nostalgia, it aint cuz I’m craving crans. Still – 2 points for O.G.-ness. 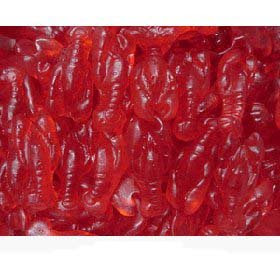 Perhaps the saddest part of my foray into the Lobstahs is their consistency – like bad bait; a plastic-y gummy worm. Not the day glo sour ones, the old skool rubbery and opaque worms. The exact kind of gummy that gives gummi a bad name. The exact kind of gummi that people, who think they don’t really like gummis, think of when they’re thinking about how much they don’t really like gummis.

But then of course, I ate the entire box! With a little help from my girls, but mainly me. So another 2 points for being decent enough that I’d want to finish.

But overall I didn’t really like. When I was eating them I kept thinking how disappointed I’d be if I got these as a gift from a friend who went to Maine for summer vacation.

Still, thanks to the good folks at the Candy Depot who are trying their damndest to give me candy I might like.