Sour Gummy Pop Corn is Seriously Freaking Me Out, Man

I never had so much fun as I did when reviewing this candy. Except maybe the first time I got laid. 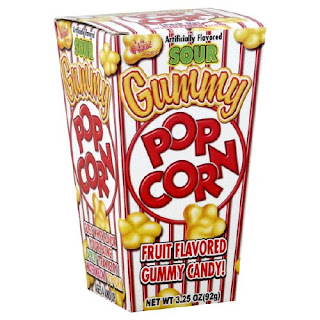 (For those who dare, go to Walgreen’s to buy it)
I mean whoa.
Just look at the name: Sour Gummy Pop Corn – Fruit Flavored Gummy Candy. I’m sorry. But WTF?

I don’t know where to start. Maybe at the end with this one since because here’s the goddamn funny part, I actually liked some of it…!

Sadly – not the popcorn flavored ones. Although they all look like popcorn…

So back to the beginning.

Jonny and I are in the hood (my new hood: the Marina in SF where you aren’t allowed if you aren’t a hot chick wearing yoga spandex pants) and we walk to Walgreens realizing that really we should be reviewing all the candy people will see around their local drugstores but might not actually think to try. When we see this concoction.

First off, it’s a buck 39. for like..hmm..maybe 20 pieces of banana yellow gummi type candy shaped like a molar tooth about the size of a nickel. They aren’t popcorn shaped really. Only the top is; the bottom is flat. And it smells terrible. When you open the package it smells like crap. Not actually crap, but not good. Not something you want to eat. The package says (and I’m not shitting you) “Guess which flavor you’re eating! Apple/Strawberry/Watermelon/Popcorn

hmm. .. ok what? Maybe it’s me – but the whole thing confused me. And still does. So, they’re telling me that these are gummy. Ok. Get that. They are in a popcorn box. …ooook. Yeah ok. So they will look like popcorn. And they are sour. um. And some of it won’t taste anything like popcorn, but some of it might! And again it’ll all look the same. Just some will be fruit flavored. And by the way, they will be fruit flavors that don’t actually ever even kind of come to mind when yr eating popcorn. And then of course it’s sour. So … some will be SOUr POpcorn.

Kudos to the cajones on Flix (who makes this stuff)! If I was the CEO of Flix, and my candymakers brought this idea to me, I’d think they plum lost their minds.

Annnnd yet.
they aint all that bad!

ok. The other flavors midly taste like the other flavors are supposed to. I think. But they are in the bag with the craptastic ‘popcorn tasting’ ones so they kinda all taste a little like that…and I said those aren’t good – thus the mess.

But then again – they are sour. And I love me some sours. Plus, the gumminess isn’t bad. A little chewy, not too soft and I’d bet they’d age beautifully. If they didn’t smell like poop, I might give these a 4.5.

But so many things drop this puppy down, like the the packaging. It’s too much box. Maybe Flix didn’t get the memo but I think most of us are trying to save the planet at this point and not kill more trees to house 20 pieces of asscandy.

Go buy a package. Just for a laugh. But 10 bucks says you won’t buy more than one. Ever.