The boys are back with more colors and flaves. Are they really any good or are they just your general grocery store confection? 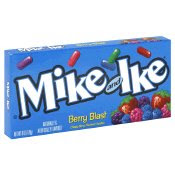 Wow that’s a harrrible title but I couldn’t resist!

Maybe it’s my middle-aged brain thinking I’m 20 again and about to blow my head off with some pharma-bred MDMA – but I’m always a sucker for pill-shaped sweets. As is the case with Mike and Ikes…the pill candies are small but in a good-sized box so I can’t quite count how many are in there and thus I must be getting my money’s worth, rigth? For Just Born(M and I makers), the pill is good because they are just the right size to pop 3-5 of them in my mouth so I can’t really just eat one at a time. I eat more and they sell more.

With names like Zours and Tropical Typhoon – not sure See’s is too worried that this V-Day, husband-chumps like me are gonnna be trolling drugstore lines for Mike and Ike’s in lieu of gourmet chocolate. And sure they ain’t no New York Yankees or American Idol, but these JustBorn folks got themselves a nice little franchise. Let’s look at the rest of the Mike and Ike’s line-up, some of which we’ve reviewed before:

Which leads us to the final namesake: Berry Blast. Simply, they are good. Not sour. Chewy. And maybe it was that they were old. Which is fine by me. But they had the feel of a tough piece of bubble gum with a hard shell when I popped them in the boca. And like I said, I couldn’t eat just one. I had to eat like 5 at a time. So I have no idea what the flavors were. I’m gonna guess a melon, a razzberry, a general red berry or two. Who knows. The flavors aren’t what will bring you back though. Rather the texture and big box with lots of bites. Like Good n Plenty, you just get a bunch. Perf for when you want that sugar high and yr at the movies and you want a never ending box.