I’m back! From Disneyland. With Goofy Balls.

Disneyland. Long lines and lots of candy. And everyone is eating it. 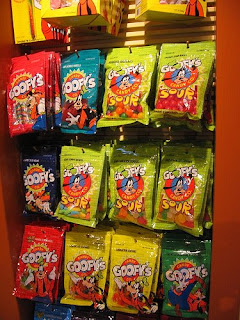 I love my title.
Cuz it feels like it’s been weeks since I posted, and I’m about to review sour balls that are labeled Goofy’s Sour, which I got from Disneyland. I was there with my kids.
It was busy. Who would’ve thunk.

The Goofy’s Sour Balls package I got is the one that’s one left of the upper right corner in the image. (Thanks Jpesci – if not for the name alone – for allowing me to lift your flickr art). Can you see how they all say “Goofy’s Sour,” and there are no extra words like “Balls” or “Worms”? Kinda weird no? Maybe cheap…?But I say okay to Disney on that one. Heck, I see the clear packaging window and it’s big enough to peer inside. I can figure out what they are. All I really want to know is if they are sour anyway and that’s a can’t miss on the package.

I also liked the color of the package. Same as sour skitts. So maybe there was hope.

Let’s break it down:

Yes – they are sour.
Holy hell they are sweet.
But. They are sour, so the sweet gets all mushed up and I’m thinking are these too sweet? At first bite – yes. Yes they are too sweet. But goddamn if the sour doesn’t just pile right on in there and suddenly I’m like, “ok. That’s fine. I can eat more.” (I have this thing if things are too sweet I just can’t eat a lot of them.) Still, after about 5 or 6 in I’m done for the sitting. I think it’s safe to say you probably won’t eat the whole package at a go either.

The flavors are OK.
The grape tasted nothing like even fake purple and I like fake purple grape stuff. But the cherry was definitely cherry and not some-kind-of-some-other-berry. The orange was orangey. (I’m noticing orange is getting a bit more love these days. Orange used to be an also ran in the candy package. Nothing more than color filler. But now I even look forward to seeing how orange plays out.)

These balls are juicy. Very juicy. Or just so souresque that my mouth watered a lot. Whatever it was – I was kinda impressed by that. I expected with Disney making the most ridiculous amounts of money from every shlub that walks through the gates (tickets, food, clothes…I bought 2 Cinderella dresses for my little ones and they were 140 bucks. I’m aghast at myself) — that they had no need to make good candy. Me and every other doting dad will buy it anyway on our one Disney trip per 3 years. It’ll sell. EVERYTHING sells there. My point being that Disney has every reason to create cheap, dry boring candy and these aren’t. If I saw them in a Walgreen’s and I wanted sour balls – I’d buy them.

Bottom Line : Good sour. A tad sickly sweet. I think it’s safe to say they got themselves some balls there at Disneyland.