Zours -Get it? They’re SOUR! But they spell it with a Z, it’s fucking INSANITY!!!

Sours for the geriatric set. 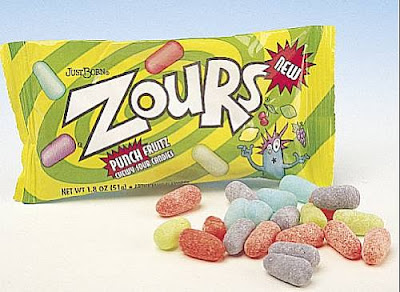 Oh, I love being in the candy business. Think about it: I’m compelled to seek out at least 2 new candies a week to eat, potentially love or spit out in a mess all over my son’s unsuspecting trains (cause they’re everywhere), and then I write about them! I’m not sure there is anything-and I’m being serious-that I would rather write about. Cause I love the stuff. And if you follow our reviews at all, you know that we pride ourselves on being an authority on the best sour treats out there. Therefore, I felt it was time (and I was nudged by a fellow blogger, thanks D!) to review a candy with the weirdest/worst company name ever: “Just Born”. Born? I really don’t need to envision my sours being eased out of a vagina, thanks. Anyhoo, the candy in question?

Zours remind me of someone repurposing an old candy for a new one. Why? Because they are the same size and exact same consistency as Mike & Ikes. The only difference is a really weird dusting on the outside, that I’m relatively sure isn’t a citric acid, so it must be corn starch (to ease getting the candies out of the molds they’re made in). It doesn’t taste good.

Anyhow, they basically are Mike & Ike’s with yuck on the outside, but when you bite in, the sour jumps out at you. It’s a pretty big sour punch, which I like, but…the actual flavor isn’t remarkable at all. I kept popping them in my mouth, hoping for something more, but it just never happened.

The ironic thing is that Mike & Ike have a flavor called “Tangy Twister” (Matty’s review here: CLICK ME, YO!) that doesn’t even bill itself as sour, but kicks ASS over these.

The moral of the story folks is that the sour candy world is officially saturated. This doesn’t mean that candy makers shouldn’t be producing more sour candies–in fact, I’d argue the opposite should be the case. But you gotta up the ante, dude. Put some effort into the actual FLAVORS you’re selling. They don’t have to be bullshitty concoctions like “tropical punch” or “kiwi strawberry”–a real, distinct sour lemon would be the bomb. Or orange. There’s nowhere NEAR enough sour orange candy.