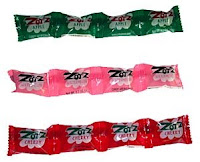 Ever Zotted out? Do you even REMEMBER what Zots are? I sure didn’t. But then I did-I think I used to eat these bad boys in the 80’s, but it’s
been a long, long time since the 80’s, so who knows?
Last Saturday, Guru Scotty and I were in my local candy store spending our weekly paychecks when we decided we had bought enough crap. Heading out the door, I saw “Fundip”-now THAT I definitely remember from being a kid. SO we d
ecided we had to get it, and Scotty thought we should throw in some of the weird looking candies next to
it, which just happened to be Zots.
ZOTS!!!!
Fast forward to about 11:00 that night, the kids and wives are asleep, we’re watching the women’s volleyball finals in Bejing.
Did you ever wonder about WHO exactly decided that women beach volleyball players should wear bikinis? I imagine it as a conversation like this:
COACH: “Hi, Gina. Um…yeah, practice was great.”
GINA: “Awesome, see ya tomorrow-“
COACH: “uh, listen. So I’ve been thinking…how do you feel about bikinis?”
GINA: “what are yo talking about?”
COACH: “I’m imagining you in a bikini, playing vo
lleyball. Whaddaya think?”
GINA: “…..silence….
COACH: “it’s gold, right?”
GINA:”…so…you w
ant me to be in a bathing suit while I’m playing sports?”
COACH:”Do you LOVE it!?!?”
GINA:”…..but we’re playing SPORTS. You want us to wear underwear more or less while we’re playing sports??”
COACH: “This meeting is over”.
But I digress.
So anyway, as we’re tearing through our pounds of random candies, out come the Zots. Basically, they’re little balls of hard candy with a sour fizzy powder inside. The flavors are very good- we tried lemon, grape, and watermelon. Sweet, tart, interesting,…overall, a very tasty treat.
I think they changed the packaging since they originally came out, which is lame in my book, but hey-they taste good, are sour like me, and are weird looking. Plus, you get to scream:
“ZOTS!!!!!” (kinda like Star Trek 2 Wr
ath of Khan when Kirk yells “KHAAAAAAAAN!!!!!”
Bottom Line: These are good. Probably not an every day treat, but damn good every now and then.