Wheels in my mouth, keep on turnin'... 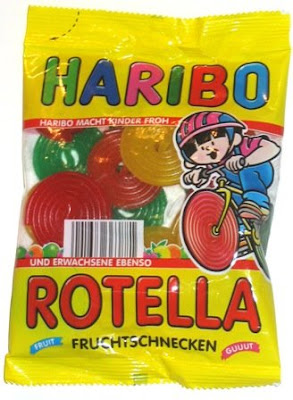 I never understood the lyrics to that “standard” song. “Let’s call the whole thing off”? Why? What thing?

Let’s cut to the chase on this one: Haribo, Lord of the gummies, makes a ton of shit. And this particular candy is called 2 different things, depending on what country you’re in. In the US, they’re donned “Fruit Wheels”, and in Europe, they’re “Rotella”. Same candy.

The reason they’re called Fruit Wheels is cause they look like rolled up pinwheels. These candies are really unique though, cause their consistency is once again, different from the rest of the Haribo family. They’re definitely not soft, and they’re not…chewy, like Haribo Fruit Salad, or even tough, like Haribo Twin Cherries (Matty, get on that shit, why haven’t you reviewed them yet? They’re yer fave!). They’re a weird combo of tough and downright plastic-y hard. But don’t let that detract, it actually makes these candies what they are.

Because they’re rolled up pinwheels, you can attack these in two way: just take a bite out of it like a corn fed red blooded American male, or, unroll the thing, and eat away at the chewy, tough string that unfolds. I’m kind of a half & half guy-I start out unrolling, but then the flavor gets the best of me and I bite the shit out of it.

Let’s talk about those flavors, cause really, this is another case of Haribo hitting it out of the park. They come in four colors: red, green, yellow and orange. Flavors are straight forward (Strawberry, Apple, Lemon and Orange), but damn it, they’re good. Really good, deep flavor, a nice hint of tartness, just overall scrump.

Here’s the thing though: you kinda need to eat only 2 or 3 at a time. For whatever reason, they just don’t seem to lend themselves to mass consumption. However, whenever I see their delightful little faces taunting me from the bag, I want some, so clearly, I’m not getting sick of them. It’s weird, but I’ve accepted it.

When we first started the Candy Gurus, we had our first group tasting with a few other guys, just to see what we all thought about a handful of candies. I brought these, billing them as the second coming, but they didn’t really go over as well as I’d hoped. Of course..these “”cram” session no longer exist.  Rather, Matty and I reign like the dictator gummie-centric bastards that we strive to be.  No more groups.  You don’t like it?  Piss off, read a chocolate blog.  Gummies too hard?  You must be a fan of supermarket line “Trolli” crap.  Move along.  Yes, I’m bitter, but people…we say that at the banner of this blog, ok!  We’re not NICE PEOPLE here at the Gurus, we just love candy.  Back to the task at hand: What’s clear to me is that these fuckers are a good, solid, occassional, taste sensation. Not an every day standard by any means, but something that’s super dope every now and again.

It should be noted that you can also buy these in just packs of strawberry. Normally I don’t go for that kind of thing-single flavor packs of candies that normally have a variety of flavors. It’s just wrong. However…the strawberry wheels are so friggin’ good, I’d probably buy them if I couldn’t find the mix. The only place I’ve ever seen these in a store in California is Cost Plus-they have the hanging bag of strawberry only, and previously, they had 3 pound bags of the mixed flavors.

Bottom Line: I can’t say that I recommend ordering these from Ebay or some over-expensive European online candy store, but if you see them in a store, you might want to pounce.