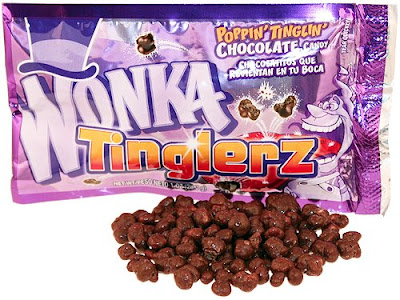 If you picked up a bag of these Wonka Tinglerz, what would you thinkthey’d taste like? Me, being a Wonka fan, I was sure that this was some sort of chocolate covered sour nerd. Didn’t sound altogether fantastic, but..that hasn’t stopped me yet.Of course I was wrong. No Nerds inside. Oddly, these are like a hybrid of a few different candies you’ve probably tried. Looking more like rat shit than a confection, Wonka Tinglerz are more or less like little balls of the classic “Krackel” bar, or to put it another way, they’re reminiscent of chocolate covered Rice Crispy Treats. That’s not where it ends though–as you’re chewing/swallowing the Tinglerz, you get that classic Pop Rocks “sizzle snap & pop” throughout your mouth. In this respect, they’re not “like” Pop Rocks- they behave exactlylike Pop Rocks.To recap: Rat shit pellets–> Krackel Bar–> Pop Rocks.The thing is, they’re not bad. Certainly not my thing, but the chocolate turds are tasty. I could live without the Pop Rocks effect, but it’s not a deal breaker. They just aren’t anything special as far as I’m concerned. I’d certainly never buy them again, nor did I finish the bag.

However, every other person that I gave some to liked them. Everyone. This leads me to believe that there’s something here, but…whatever it is, it’s not for me. I like chocolate-kinda. I like Krackel Bars- a lot. I don’t like Pop Rocks (see my review here: CLICK HERE, YO! ). And I still say that chocolate covered Nerds would kick ass over this.

Bottom Line: If my review sounds tasty to you, you’l probably dig these. Kind of like 2 worlds colliding that have no business being in the same solar system, but…hey, if it works for you, work it.