Too scary to eat much, but they're pretty decent. 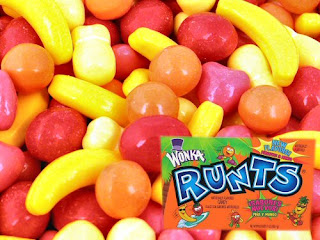 Seriously. Have you ever had these things? They’re kind of like the red headed step child of the Wonka family-sure, they’re THERE, but..why would you buy them when there’s SO many other options in the Wonka family?
I had to find out, or at least refresh my memory. I know I’ve had them in the past, but needing some fresh meat to review, me and Matty bought a box.
So here’s the deal: I got drunk last night, sue me. Anyhow, on the couch, I busted these things open and began to dive in. For the good news: they’re good. They’re not great, but they’re interesting: hard little pebble-like candy with an outer candy shell. Inside, it’s like a pressed clump of sweet powder that dissolves nicely in your mouth. Even better, they added 2 new flavors : pineapple & mango. Or is it one combined flavor? I ask because I never saw a mango, but the pineapples were damn good. I found myself almost eating the entire box, and the box is HUGE, so they gotta be decent.
The bad news: these fucking things DESTROY your teeth. To say they start our hard is an understatement. The worst offender is the banana, which literally almost broke a tooth. But I was drunk, so I went with it. As I get older, I’m sure I couldn’t even pretend to eat these, as my dental bills are already high (Thank you, Mr. Wonka!).
I think my initial reaction to Runts-questioning why I’d ever buy them with so many other options-is essentially the headline to this review. Runts are “OK”, but…too risky on the teeth and ultimately not flavorful enough & not nearly tart enough for me.

: Nothing to see here, folks. Move along.