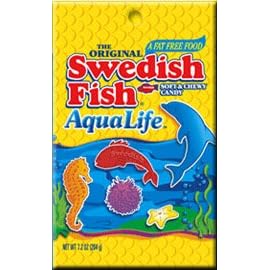 Hey folks – it’s me, Matt the guest poster, not the Original Candy Guru Matty. I’m here because there’s been a gap here on the Candy Gurus, and THIS WILL NOT STAND. I can’t do it any longer, folks – there’s just no reason that this blog has gone on this long without discussing one of the all-time greats, Swedish Fish.

But because we do things a bit differently around here, I’m going to bypass the classic (after a brief refresher course) and breeze onto one of their new offerings, Aqua Life.

First, let’s talk about the classic Swedish Fish. You know them, you’ve gnawed on them for years. They come in any color you want, as long as you want red. (See what I did there?) They’ve got a good flavor – sweet and somewhat vaguely berry tasting (is it cherry? Strawberry? Wikipedia proves to be its usual helpful self when it describes red as “Swedish Fish Flavor”. Thanks, guys.)

I lurves me some Swedish Fish. Let’s just get that straight.

But a few years back, I noticed a bag in my local Walgreen’s called “Swedish Fish Aqua Life” — so naturally, I grabbed it. In it, there’s a bunch more flavors and one of them is – hey! – the red fish.

Let’s break down the flavors:

First of all, kudos on the multiple types of flavors, and yes these all taste different than each other. But Aqua Life misses out on the genius of the original candy in a few ways.

One, the texture isn’t quite there. These candies, while delicious, are all a bit softer than the original product – even the red fish themselves. That’s a bummer, though they still do have a good amount of toothstick.

Two, the flavors – while different from each other – are hardly strong. What does that mean? The only one that I can actually recall after eating a bag (what?) is grape. Grape flavoring is a bit controversial – Jonny tends to like it, I usually don’t (even though the actual grape might be my favorite fruit of all time), but this does stand out. I really have to profess disappointment at the two flavors I should be the most excited about — that’s right, lemon and lime. These aren’t sour at ALL, and if you don’t have sour lemons or limes, what exactly DO you have? 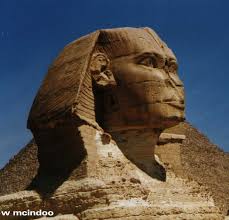 Seriously, that’s like the riddle of the Sphinx. (By the way, apropos of nothing, I think I want to have an alter ego named Leon Sphinx. Dig it.)

The shapes and sizes of the candies ARE in some way pretty engaging. Hey, when was the last time you chewed on a grape pufferfish, I ask you? And it’s pretty damn easy to power straight through an entire bag here, a factor I can’t deny.

But what these aren’t, really? Is Swedish Fish. For that, they lose a point or two. Still, it’s worth trying a bag for yourself – you never know, you might love the taste of a blue raspberry dolphin.