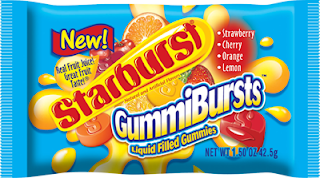 Why is one show about the supernatural good, while the other sucks?

Why is one fast food burger disgusting, while the other is tasty?

Why does one album by The Killers stink, while another is really good?

And finally, why are LifeSavers Gummies “Fruit Splosions” yummy (review here) but THESE liquid filed gummies by Starburst taste like shit?

I don’t know. If I knew, I wouldn’t have bought them, but thems the breaks.

Are we REALLY gonna see a revolution of liquid filled gummy candies? Do we really need this? And perhaps most importantly, wouldn’t you try to make your “new, interesting, groundbreaking” candy taste good? ESPECIALLY if you’re representin’ Starburst, a quality confection family?I think, just like competing movies about Volcanoes, Queen Elizabeth, and the Kennedy assassination, if you’re the second to the party, you just speed that shit through production to get it “out there”. And in this case, I’m sure that’s what Starburst did.Having four flavors (Cherry, Strawberry, Lemon and Orange) that require no imagination or apparently flavor, I was once again ready to be disappointed-and I wasn’t disappointed! I mean, I WAS disappointed, but because I was expecting it, I wasn’t………well,…..you know what I’m saying.
I’m gonna cut to the chase here-these don’t work at all, on any level. Only the lemon flavor is distinguishable, but still, the liquid center is a toxic, sugary, goo brew that eliminates any of the lemon goodness on your tongue. I seriously don’t know whether I was eating cherry or strawberry when I ate the red ones, as they both taste like red and are colored alike.  I’m SO sick of cherry and strawberry flavor candies-they DON’T WORK, people. They’re SO rarely good, why not just go for something that has a higher success rate?After “eating” the strawberry (bland red), strawberry (bland red) and lemon ) sweet sort of lemony) I made a last ditch effort to salvage SOMETHING.  I reached for the only flavor I hadn’t tried-orange.Wow.

Ever been to your Grandma’s and had one of those disgusting orange filled chocolates? I suppose you could have had one anywhere, but let’s just say you’re at your Grandma’s house, it makes for a more disgusting story. These orange gummy abominations remind me of Grandma’s fave- sticky, sweet, cloying goopy orangy (but not citrusy orange, just generic plain orange) poo buttons. I literally uttered a “Aargh!!” as it went down, and this was at 12:30 in the morning, alone. No one to talk to in particular, I just had to get it out.

Back to the goo shuttles, I just have to wonder whether some people out there actually like these. And why, WHY aren’t Starburst’s original flavors (not the names of the flavors, but the taste) come through? Isn’t that the whole point of having branch off candies from a big company? That you can tell it’s a Starburst? Failure.  Total brand over saturation failure.

Bottom Line: My only solace is that I bought the 89 cent bag as opposed to the $2.79 hanging bag. I don’t recommend these to anyone, anywhere.  Not in a boat, not in a moat. I do not like these crappy spurts, I do not like the Gummibursts.