Review by: Jonny Sour Patch Kids have been around a long time-in fact, a lot longer than I’ve know about them. One of the first mass produced sour gummy treats, these things should be among my favorite flagship sours, right? I’m not so sure. As for the positive, they ARE sour. A sweet, super sour […] 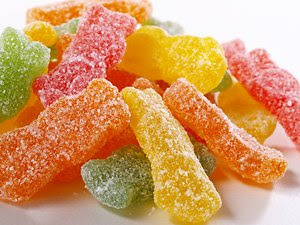 Sour Patch Kids have been around a long time-in fact, a lot longer than I’ve know about them. One of the first mass produced sour gummy treats, these things should be among my favorite flagship sours, right?
I’m not so sure.
As for the positive, they ARE sour. A sweet, super sour sugar coating surrounds each piece. The gummy itself is sweet, so it’s a nice combination. Where these things seem to fall short for me is in the actual flavor- seriously, I can’t tell one from the other. They all kinda taste like the same sweetish fake fruit flavor-which isn’t bad, don’t get me wrong. It just doesn’t float my boat as much as I’d like.
The second issue I have with these bad boys is the consistency. If you know us at all here at the Gurus, you know we’re not usually into soft gummies, and this is no exception. They’re just too damn soft, which lends them to semi-disintegration once you start chewing. Fine for many, not optimal for me.
The solution? Aging, of course! I picked up a Halloween bag of individual packets of Sour Patch Kids and “forgot” to hand them out (partially on my wife’s insistence, go figure). Unsatisfied with the consistency, I decided to toss them in the fridge for a day or so. The result? A firmer, (and decidedly colder) Sour Kid, that’s for sure. The firmness increase definitely makes them a better choice for me, and the small portion packet is just the right amount, or else I tire of them kinda quickly.
In closing, Kudos to the makers of Sour Patch Kids for pioneering my favorite genre of candy- the sour gummy. These are definitely a quality treat (and great at the movies), and can stand proud among the rest of the gummy family. However, they’re not an every day thing for me, but…that’s probably a good thing, seeing as how there’s plenty of other treats that I shovel into my mouth on a daily basis.