Ahh, free. Free’s good, right? Free advice, my friends, about the crucial candies you need to try and need to stay away from. Far away. Sit tight, cause this one’s got disaster written all over it.

Somewhere, for some reason, the candy magnates of the world decided that we needed gummy candies with liquidy sweet goo in the middle. Probably the same people who decided that pizza needs cheese stuffed into the crust. Next up? Sandwiches with Pastrami baked inside the crust…..wait. Hold on. That actually sounds hella good!

But back to reality. I’ve reviewed two: one good ( Lifesaver Gummies Fruit Splosions) and one haaaa-rible (Starburst Gummibursts). The follwoing 2 will be the last two I ever review, cause I’m done. It just isn’t right.

First up, “Sour Patch Extreme”. I kid you not, when you open the bag, these things look lice sweaty candy colored acorns. Pop one in your mouth, and it feels like a thin gummy layer surrounding a lot of liquid. It’s freaky. Kind of how I imagine popping someone’s eyeball into your mouth might feel.

Then you bite into the sicky acorn, and the goo comes out. Sweet, sweet, and then a little sour. But,…it’s so gross, even I can’t rationalize these. To be totally fair, there’s some decent tastes at times in the bag, (the Apple strawberry actually wins the most realistic tasting strawberry award) but overall it’s like a car wreck involving teenagers where no one really gets too hurt. You try to look away, but it’s funny so you don’t. I decided I didn’t like these, but found myself eating about 8 more. Then I threw them away. Tough love.

Next up? This one’s tough. Way tougher.

Why? Because my fellow gurus Matty & Scott both told me about these bad boys, and both enjoy them. Normally, that means 90% of the time I’ll like them too, as our tastes are pretty much in sync. This time though….not. 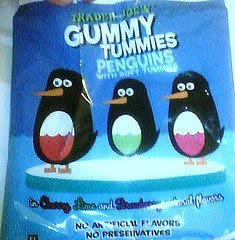 These are little penguins with liquid in their tummies. Thus the name, Trader Joes Tummies. Not what I’d pick, but hey, it’s interesting so they get points for that.

Going back a few years, Trader Joes used to make (and maybe they still do) a bag of fruit gummies that were flavored naturally with fruit juice. They had a very distinct same-y taste to them (not a lot of difference between the flavors) that I remember well. These have the exact same problem with the exact same taste.

I’m flashing back to childhood in Los Angeles (after moving from Philly), with my Mom, concerned about eating right, feeding me and my brother carob instead of chocolate. Carob is disgusting, and there’s no debate about that. Substituting something foul for something amazing is just plain stupid. How about this: eat LESS chocolate. Or LESS gummies. Or for fuck’s sake, less super sized friggin’ burgers and fries. It’s not that complicated. Yes, it’s hard to DO, but it’s not that hard to figure out. Anyhow, I digress…

My point is that these penguin abominations don’t have to taste like shit. My favorite gummy candy of all time (Rowntrees Fruit Gums) are made with real fruit juice, and their flavors are amazing. So why do these taste like freaky fruit? No real flavor, just an overall weirdness. The liquid in these is less pronounced than the Sour Patch Extremes, but honestly…I could only eat 2 of these before I was done. I REALLY don’t like the taste, and now that it’s official, I know that I don’t like liquid filled gummies either.

Also, I don’t like non-follow through, talking about cars, the NBA, beets, most non-reality newtwork TV, and prime rib. Just file that stuff away somewhere, I’m sure it’ll come in useful.

So there you have it. I know my reviews have been pretty scathing recently, but really, I’m trying! I need to find some new good candy, so please, feel free to send us requests (candygurus@gmail.com). I promise- we’ll get to them all.

I actually like the Sour Patch Extremes way more than the Tummies, so for them, here’s the rating:

And for Trader Joes Tummies:

The Bottom Line for both is to stay away. And as to the question of whether I’d buy again…what do you think?