If it weren't for Scotty, I NEVER would have picked these up. 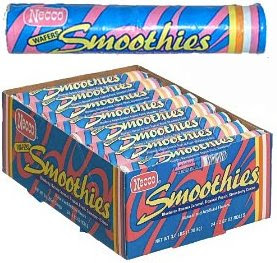 Where’s the best place in your town to buy new candies? Besides a few boutique candy shops, and I hate to say this, the best place I know of is Walgreens. For those that aren’t familiar, Walgreens is a drugstore type pf place that has shelves and shelves of different candy options. Last night I stumbled into one, and 8 dollars later, I had some new stuff to review.

First, just take a look at the packaging of Necco Smoothies above. LOOK AT IT!! Keep in mind, these aren’t a classic candy that came out in 1943 that has kept the same packaging throughout the years, despite its obvious hideousness. Not so, peeps. Necco Smoothies first hit the scene in 2006. Who the HELL did they pay to design these? It’s a Miami Vice mess of pink, blue, and yellow, all wrapped up in a weird shimmery paper wrapper. There’s no WAY I would have ever bought these, if not for my review agenda. But as we’re learning on this nutty journey, sometimes you have to veer off the beaten path…
I’m sure many of you remember the original Necco Wafers. The flavors were decidedly old school, and definitely an acquired taste-lemon (yellow), orange (orange), lime (green), clove (purple), cinnamon (white), wintergreen (pink), licorice (black), and chocolate (brown). Wow. That’s a helluva lot of weird. I go back and forth on them, but overall, I’ll pass.

When I opened up the Smoothies, it was another case of me expecting to taste one, potentially spit it out, and then chalk up another crappy new candy. Not only did I LIKE these, but so did 3 of the four folks I was with. No , my wife wasn’t a fan, but she was in the minority, and isn’t really into candy anyhow.

I know. Let’s not deconstruct that issue now, we don’t have time. Moving on…

The flavors of the smoothies are: Blueberry, Banana Caramel, Tropical, Peach, and Strawberry Creme. If you can recall the consistency of original Necco Wafers, they really lend themselves to a “creamy” type of flavor. The discs are soft-ish, and after a few sucks, start breaking down themselves.

I tried the Blueberry first, and damn it people, I liked it a lot. In fact, I liked every flavor in the pack. They’re refreshing, light, and the flavors are pretty darned distinct. I have to recommend these, just so that you can try something different. I haven’t tasted any other candy quite like these, and I sure as hell haven’t seen sick-ass retro pukey packaging like this in a long time.

Bottom Line: These just might surprise you. If you like creamy candies, they’re a must buy. And if anyone finds a tee shirt with these on the front, buy it for me. Large. I need it.