I expected so much, but got short changed 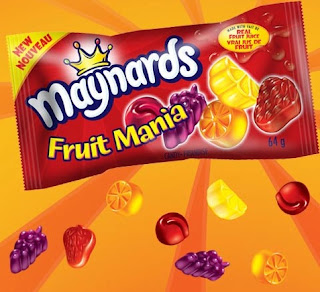 I want you all to slow down a sec.
Do NOT freak out.
Get it together.
Everyone sitting down? Good. Cause we’re about to talk about some manic shit here. Some crazy ass manic candy insanity. Some…pretty blah candy, actually.
Maynards Fruit Mania kind of hosed itself with its name. I wish I could have been a fly on the wall for the brainstorming session in which they came up with this name. Because the problem is that the candies don’t really taste as fruity as I think Mr. Maynard would like. In fact, whoever decide that they induce manic frenzies of fruit gummy zaniness probably feels the same way about Will & Grace. ‘Nuff said.
Having said that, the flavor aint the biggest problem. It’s the consistency. You might recall that Maynards also make Wine Gums, Sour Wine Gums, and Sours, which all have great consistencies-hard, chewy, toothy, complex.
“The Mania” is more like a sticky softer chewy mess. The kind of gummy you’d expect to buy at Safeway at 1:00 am in a generic looking bag that reads “ARTIFICIALLY FLAVORED MEDIOCRE GUMMIES”. But from Maynards? Major bummer. I was expecting the world, I got a highly mediocre experience.
All isn’t lost though. Cause seriously, I’m crazy. What do you do if your candy isn’t aged enough? We here at the Gurus have 2 methods:
1. Air. This is clearly the best method, but it requires time. It’s easy, too. Just expose the too-soft gummies in question to air (open the bag, dummy) and leave it somewhere that little hands and bugs can’t get it for a few weeks, if not longer. This will work WONDERS for your Red Vines (the genesis of this method), but again, takes time.
2. The fridge. Yes, the fridge is the quick answer. Not only does your candy get its cold on, but it will firm up a LOT in a few hours. Kind of a quick fix, but effective.
So I fridge these out and they become passable. But really, I have to honestly say that I won’t buy them again. No tartness at ALL, and while I shouldn’t really expect that from a candy that doesn’t advertise being sour or tart, I kinda do. I’m just that way. Gummies should know in 2008 that the playing field has changed, and so has our taste buds. We need depth, sweet, sour, spicy, salty, all of it.
So having said that…the ironic part is that you most likely will never see these anyhow, as I don’t believe that they’re sold in the US currently. But if you DO happen to lay over in Heathrow en route to a delightful vacation, don’t waste your Euros buying these. You’ll be much better off with Maynards Wine Gums, Sour Wine Gums, or Sours. Those all rock and have unique, great flavors. These…just don’t inspire mania.