Mamba Sour. I have some issues here.

tasty, but lame-o packaging bums me out 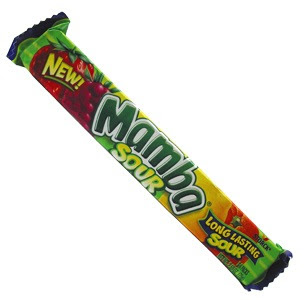 I like anything sour, so it’s really not that hard for me to give a positive review to these newfangled Mamba Sours. But before I talk about the candy itself, let’s get something out of the way: There’s 2 problems with these.
1. Unlike the similarly packaged Starburst candies, the Mamba packaging is deceiving: Once you open the outer wrapper, you’re met with three smaller wrapped groups of candies. What the hell? And check this- they’re grouped by flavor. So unless you like eating ALL the orange before you even try the raspberry, you’re out of luck, unless…you open all the little packs. A minor nuisance, but stupid. I don’t get it. Variety, people.
2. Speaking of variety: I’ve bought these on 3 different occasions. And every time, I get 2 raspberry packets and one orange. Yet they show lemon and strawberry as available flavors as well. This isn’t such a minor thing, it’s flat out lame.
Where to go from here? Oh yeah, the candy. It’s good. It’s sour, mouth quenching, decent fruit flavor, relatively satisfying. But the question is-why buy these when the FAR superior Starburst Sours exist? Answer: I won’t. And you shouldn’t either, unless you like dealing with a lot of packaging and not a lot of variety.