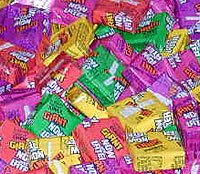 Now? Or later?
Take now, for instance. It’s early. Matty’s kids and my little dude are fighting over a wicker basket. This is after they were fighting over a green pillow. There’s tears.
And it’s not 9:00 am yet.
So screw now, let’s talk about later- Giant Now & Laters!
We all remember classic Now & Laters, right? The devilishly hard tooth cracking chews were a staple of my youth. I definitely remember cherry, fruit punch and apple, but I’m sure there were other flavors as well. And the namesake was spot on-at the time it seemed impossible to eat them all now, so there was always a later.
Introducing Giant Now & Laters. A bit larger, a bit softer, and just as yummy. The flavors that I’ve seen include apple (auce, tastes just like the classic apple), fruit punch (yummy), grape (always good. Seriously, grape candy is always good, enough said), cherry (eh…I’m not a huge cherry candy fan, but it’s fine as far as candy cherry goes), and…banana.
Banana? How the hell does banana fit in with the rest of these tart/sweet chews? It doesn’t. It’s just a sweet mess, too sweet for me. However, I’ve only seen them offered in bulk, so I just don’t grab those.
You’re gonna dig on these, because they’re not too hard–and thus your decrepit old teeth won’t have a problem digging in. The flavor’s there (save for the banana), and as far as chews go, they’re pretty damn satisfying. Of course you look kind of moronic blasting through a pile of them at work, but if I cared how often I looked like a moron, …I’d have to start therapy.
Of note is that you probably shouldn’t let the kids get a hold of these, as the choke factor’s got to be really high, but that’s what the high shelfs in the cupboard are for, right?

Bottom Line:They’re good, especially the apple. They relieve some of the overall pain of life, but clearly-not enough. Oy.