These came right out of left field... 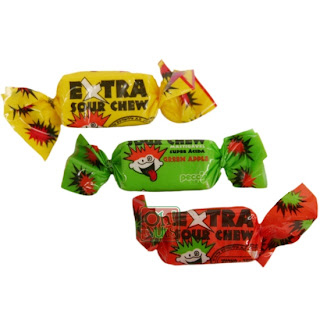 Greetings, sour fans. I stumbled across these not-very-uniquely-named “Extra Sour Chews” on the website www.ohnuts.com (as well as the picture above, thanks!) as I was ordering some other yummy candies. I decided to buy a pound on a whim, and let me tell ya…it was a good decision.
They’re small, first of all, which is cool, because the flavor isn’t. This means I can eat more, dum dum. Get it?
They come in cherry, orange, green apple & passion fruit. The flavors are on point, especially the passion fruit-seriously accurate fruit flavor, and really yummy. And I agree with Guru Matty- Orange is the new Blue Raspberry. Finally getting some love from candy manufacturers, orange flavors (and this candy in particular) are really coming into their own, tasting much more citrus-y and real, like a real orange. The sour level of these chews is right about a “7”–you definitely know you’re munching on a sour treat, but it really integrates with the flavor rather than just dominating your mouth.
As far as the chew…it’s simply great. It starts out kind of stiff, but immediately softens as you chew it-sort of like a chewy Now & Later. Really good stuff.
They’re made by a Brazilian candy company that doesn’t appear to import any of their candies h ere except for these-and even so, I couldn’t find them on any other web site. So if you wanna pick some up, check out the fine folks at www.ohnuts.com.
Did I mention the price? (Wait for it…) $2.99 a pound! I thought it was a misprint when I ordered originally, but it’s not. Go for it, kids.
Bottom Line : Hell yes. Cheap, good, sour chews? You had me at cheap.