Dum Dums. In a lot of ways. 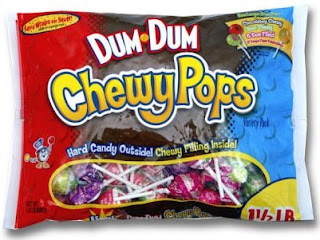 This was a total impulse buy. I was in Longs, about to introduce Hank to candy corn for the first time (sidebar: candy corn is friggin good. Seriously, why do so many people hate it?) when I saw this bag of Dum Dum Chewy Lollipops. Upon closer inspection, I noticed that there was something different about these-they have 3 different kinds of chewy centers: sour chew, chocolate, and gum. Hmm. Sounded unique, I had to buy the bag.
Cut to the next day when I tried them. The good news: they’re only 20 calories a piece. Bad news: they’re not good. And really, it’s not the flavors, it’s the whole thing. Here’s the problem: Dum Dums are small. They’re really small lollipops, which incidentally, makes them perfect for kids, as they don’t last that long. But the thing is, when you try to fill something this small with a filling, the actual AMOUNT of filling is way smaller than the pop (obviously), to the tune of being a pea sized ball.
For gum, this is ridiculous. It’s like trying to chew half a chicklet. Moreso, a colleague of mine who I gave one to commented that the gum tasted like cinnamon. Not cool, when the lollipop flavor is grape.
Moving on to the “chocolate” center-again, it’s like a pea sized ball of tootsie roll filling, but WAY less tasty. As for the sour chewy center (the only one I was really looking forward to), they weren’t that chewy, and they sure as shit weren’t sour.
Let me lay a few of the flavors on you now for perspective:
Blue Raspberry with gum center
Banana with sour center
Strawberry with chocolate center
Apple with gum center
Vanilla with chocolate center
Sour banana? Vanilla with chocolate? I dunno. I call shenanigans on these things, and so…to the Halloween basket for the neighborhood kids they go!