Cubyrop Asian hard candies. I have nothing witty to add. 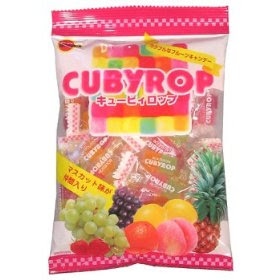 Part of the inspiration for creating this candy review site was to give attention to candies from every country we could get our hands on.  Part of this was an attempt to share some thoughts about some lesser known confections, while the other part was purely selfish- we know damn well that America is not the top of the pops when it comes to candy. There’s no question the the UK in general, many latin American countries, and many other countries produce more interesting, higher quality stuff that you can get at 7-11. This is not to say that America doesn’t come strong to the party, but..I’m just letting you know where we’re at.The problem is that it’s tough to find NEW candies from other countries, as usually only the most popular ever surface around here. Therefore, when I see something new, I buy it.  Ergo sum, Cubyrop.There’s no way I’m not gonna come off as ignorant here, so I won’t even pretend. I have no idea what country these are from, but I’m guessing Japan. Regardless, I was very intrigued by the look of the candy itself, as the packaging allows you to see the individually (well, 2 pieces per, actually) wrapped candies. They’re pretty little cubes, and as I squeezed one through the package, I couldn’t tell if it was ultra firm gummy, or a hard candy. Crossing my fingers for an ultra hard Asian gummy with flavors billed on the bag such as mango, melon, litchi, lemon, grape, orange, peach, and strawberry, I purchased.  Come ON, gummy!

And a short word about their flavor choices : Bravo, good people, bravo! Thank you for at least trying to give us yummy creative REAL fruit flavors. Even if they weren’t going to be  successful, I give mad Asiatic props for the attempt.

Not gummies.  Hard candies.  Moving past yet another disappointment in the long list of my life, I re-calibrated my expectation.  There’s not too much to say about hard candies, is there? I mean, …they’re all the exact same consistency, so it really comes down to one thing only: flavor. I’m happy to say that, for the most part, these flavors work. In fact, none are bad, the worst I can say about any of them is that some aren’t as developed as they might be.

Sidebar: Any fruit in nature that you eat has an extremely developed flavor. Any and all of them. That’s why fruit is my favorite thing, you’ll never, EVER taste a fruit flavored candy as complex tasting as a real orange. Or pineapple. Or grape. Well, maybe grape. The thing that all fruit have in common is tang, or a mild sour flavor. Even fruits that you don’t think are tangy, they’re tangy, baby. Apple? Tangy. Blueberry? Tangy. Lemon? Don’t play, we know that one. Strawberry? Tang central. So it’s an achievement when a candy maker can have all of the important qualities in their fruit candy : a flavor that tastes like the actual fruit, that’s sweet, and that’s also slightly sour. This combination is what makes a classic fruit candy, at least in this man’s opinion.

The Cubyrop don’t quite cut the mustard on the full developed flavor, so what you have at the end of the day is a tiny little hard candy cube that, while tasting similar to the fruit it’s supposed to be, isn’t really a revelation. I’m thinking that fatness wise, thse are great since they’re so small, but I can’t read the nutritional information as it’s in “not English”. Let’s just call them 200 calories a piece, so I don’t feel bad for giving them away.

Even the .300 baseball hitter makes an out 7 out of 10 times he comes to bat, so I’m not gonna say any harsh words to the fine makers of Cubyrop. In fact, I’l say kudos for the flavor choice, and congrats on making one cute ass little piece of candy. But 200 calories a piece??! That’s crazy!!  Who the hell do you think you are, that’s dangerous!

Bottom Line : Ok, they’re not 200 calories a piece, but they’re also nothing special. If you’re a hard candy fan, you might actually dig on these a lot. They’re different looking, that’s for sure, so there’s definitely a possibility that you might want to check these niblets out. If so, try Walgreens, that’s where I got them