Crazy? Or just not sane? OR, just not good? 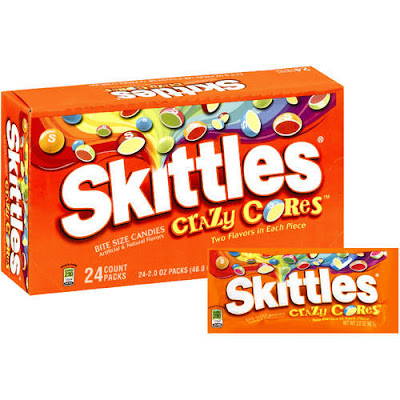 It must be trippy working for a major candy company. I’m imagining that every year or so, the “old man” boss walks into the war room, and looks around the long table at all of his top candy men. “Gentlemen,… we’re stagnating. We need some fresh flavors, and they need to be….CRAZY!”

And that’s how you get Skittles “Crazy Cores”. I’m just gonna cut to the chase on this one. I don’t like them. But really, I don’t like them not because of their taste, but because of what they are. They’re bogus. They’re a scam. Bob Marley definitely would have called their creators Crazy Baldheads. And why?

Because the entire marketing campaign of “crazy cores! One flavor on the outside, and another inside!” is crap. In fact, the product IS an advertising campaign, because as far as I can figure, these Skittles are NO different than any other Skittles, except they have different flavors. Much like the other 10 varieties of Skittles.

I envisioned some different kind of candy eating experience- one taste on the outside, another on the inside. Cause that’s what the ads say they are. But they aren’t. They’re simply a murky combination flavor. Nothing more. Some work decently, but most just suck. Here’s the play by play:

Mango Peach – this one works pretty well. Again, it’s a combination flavor, not one after the other.

Cherry Lemonade – No. Tasted like medicinal red then some sweet lemon undertones.

Blue Raspberry Lemon – The best of the bunch, but only because all you can taste is a sour lemon.

I guess it’s true that these are more successful than Wild Berry Skittles, but for me, that’s not saying much. My boy Hank thinks they’re the greatest thing ever, but he’s not even 4 yet. Read into that what you will.

Just ONCE, I think it would be cool to suck on a candy like Skittles and actually be able to taste a specific flavor. But because of the way that they make the hard shell of the candy, all you taste is a mild sweet…candy flavor. So the concept of “tasting” one flavor on the outside and then another on the inside is just bunko. It doesn’t work.

Screw the ad men, and while I’m at it, screw the show “Mad Men”. It’s boring.

Would I Buy Them Again? : Not a chance.