I love this time of year. It finally dawned on me last night that October is my favorite month of the year. Yes, I love the turning of the seasons (but..I live in Northern California, so it’s not really that noticeable), but it really boils down to 2 things:
1. Post season baseball.
2. Halloween.
We’ll table conversations about #1, as I know baseball bores 95% of Americans, but for me, it’s about as enjoyable viewing as it gets. Go Phils!
As for #2…I just love the whole deal with Halloween, obviously. I took my son (and wife) to the store to go Halloween
candy shopping Saturday after we hit the park. Mr.s Jonny guru, bless her heart, is a chocolate gal, so she loaded up with the snickers, etc. Hank and I fall more to the sour/gummy side, so we chose some Twizzlers, Sour Patch Kids, Now & Laters, etc. But the crown jewel was the big ‘ol bag mixed with Starburst, Sour Starburst, Skittles & Sour Skittles.
I’m not sure any of that bag will last till next Friday. And here’s why:
Starburst are a classic, and they did the sour thing right-their sour flavors are really, really sour, and really good. Tangerine’s my fave, but more on them in another post. It’s the Sour Skittles that rock my world. Always have, always will. 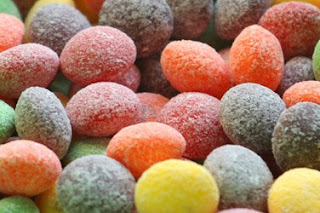 If you’re a fan of normal Skittles (which you should be, because they’re excellent), then the transition to Sour Skitts, as we call them here at the Gurus, is an easy one. What they did so well with these is that they left them alone- they literally took Skittle and added a seriously sour dusty coating with flavoring. Remember, normal Skitts have a shell on the outside, so if the sour coating wasn’t flavored, all of them would taste the same, at least until you started chewing them. Not so, due to their engineering.
The flavors are bright, and like I said, hella sour. But the relief comes when you start chewing, and you get that excellent, semi grainy original Skitts texture. I gotta say, when it comes to widely accessible sour candies, Sour Skitts ranks right up there at the top. I don’t think I could eat a HUGE bag in one sitting, which makes the little Halloween sized portions so awesome.
I know that the candy is supposed to be for the kids, but…I saw to hell with them. Let them eat Smarties and Tootsie Rolls, I say! Leave the quality stuff for Dad & son. At least…that’s what I’m doing!

Bottom Line: When in doubt, grab the Sour Skits. Flavor wise, sour-wise, and chew-wise, they stand at the top of the class.