It's their duty to keep it fruity

I used to live in Cardiff, Wales back in the early 90s. I was in drama school and thought I was even more clever than I am now. 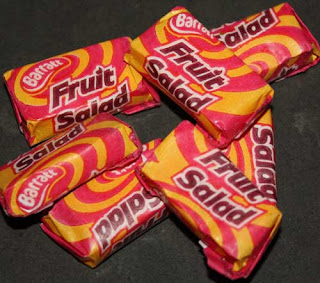 Who knows what I really learned in drama school. A few things stand out. When I did a British accent, all my fellow schoolmates laughed and said I sounded like Dick Van Dyke. (Not a compliment. see Mary Poppins.) I also remember that I had to learn Alexander Technique from a lady who was uber British cute. I was the saucy American who flirted with her all the time, and I loved her chest. Now that I’m old and wise and jumble memories to rewrite history as I like to see it, I couldn’t be more positive that this woman crushed hard on me but I was too dumb to grok that a barely 20-something California dude like me could sleep with his 30 year old professor.

Anyhoo – probably a more fond memory was that every night after classes, I’d go home with my friends Dan, Simon and Dan’s girlfriend Lisa and we’d smoke and eat candy. Ok. Not every night. Every night we’d drink beers at the college bar or local pub. But then most nights we’d smoke and eat candy. And Dammit if those UK-ians don’t have f-ing great sweets. One of the sweets I liked the most was Fruit Salad.

Not to be confused with Haribo Fruit Salad (gummi-almost-jelly fruit chews, which are much bigger with sugar coating).

These are:
Small chews. Like a thinner, harder Starburst in almost day-glo, pale orange and pink. You can see layers/lines of color if you stare hard. If you glance at them you’d they think they were simply light orange. Once in your mouth, they taste general fruity. I taste a little orange sherbet in there. Maybe a berry taste? Can’t tell. Doesn’t matter to me. I like them the same reason I buy Starbursts or Mamba — texture. They are hard (unless they’ve been in the heat) and I always bite them. So I have no idea what would happen if I just kept sucking them nonstop (said the Bishop to the actress). Once you warm em up a bit, they get uber soft and you can eat about 187 in one sit-down. Especially since they are small. Like 1/2 the size of a normal Starburst. 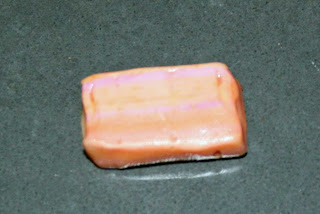 Are you going to go out of your way to find these in America? hmmm…probably not. If you find that your friend who lives in Scotland or England or Wales or Ireland sends you over a bunch – will you then eat? Or will you give to the kids on the corner? Forget the kids. Turn on reruns of Seinfeld, throw a 100 of these in a bowl, and get sick.