Take Your Childhood-Now Turn It Into A Bean. Now Eat It And Be Bummed Out 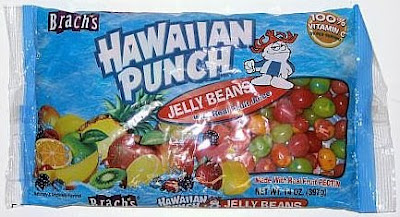 Pop quiz, hotshot-you’re 20 minutes early for your dentist apointment, what do you do? If you’re like me, you pop into Longs Drugs and prowl the candy aisle. Oh, I get the irony here, but don’t you see? Buying candy before you go to the dentist is the ultimate “F-You” to convention. It’s not unlike skydiving with a used parachute that was packed by a 4 year old. It’s like sacrificing an arm to the God of prosperity, tossing it into a volcano and hoping for the best.

Or, it’s a pretty fucking stupid thing to do. If I told you it wasn’t the first time I’ve done it, would you believe me?

So there I am, trolling the Easter candy aisle, which is freakin’ huge. Generally speaking it’s not really a holiday for me, as I’m hella Jewy AND I don’t tend to love all the crappy jelly beans that seem to define the day, but I look anyway. I buy two new kinds of beans there-I’ll review the other one soon. For now though, it’s time to check out Brach’s Hawaiian Punch Jelly Beans.

Ordinarily, I wouldn’t have bought these, but I was compelled to for 2 reasons: One, I read a good review of them on “The Candy Enthusiast”, a very good fellow candy blog. Two, the beans looked great. The color, the little specs of different colors, the size…just check ’em out: 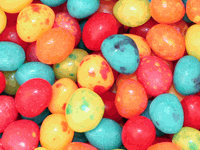 Pretty, right? That’s kinda the things with candy-when you delve in the world of gummy/sour/chewy/hard candies, color and look is a big deal. Presentation, my friends.

As for cost, jelly beans are cheap as hell. I think this bag was $1.99, and the bag aint small.

Of course, here’s where the story gets sad. I busted open the bag and immediately gravitated to the green bean-i was thinking sour apple…..but I got “Green Berry Rush”. No rush. Again, I’m hopeful, and pop a blue bad boy. That one is “Berry Blue Typhoon”. Sickly sweet. Getting desperate, I reach for the orange colored bean, hoping for a refreshing citrus blast. Think mild, mild orange. It’s called “Orange Ocean”, and that’s what it tastes like-as if you took an orange, watered it down with an ocean, then made a candy out of it. Snorefest. Not haaa-rible, but not good. The pink is “Lemon Berry Blast”, and totally confused my palette. Nothing interesting, and why’s it pink? Which left two colors-yellow and red.

Why didn’t they make the yellow lemon? I’m just sayin’, this shit is confusing. Yellow turns out to be “Mango Passion Fruit Squeeze”. Despite the lame name, these are good. The mango pops out, and tastes like real fruit. Good one.

Continuing the god news, we (finally) get to the red. And the flavor is…(wait for it)…”Fruit Juicy Red”. Huh? This makes no sense. The flavor IS Hawaiian Punch Red, no ifs ands or buts. The taste is good, if only because it’s reminiscent of the swill we all drank as tots. So why don’t they call it that WHEN THE BAG OF CANDY IS NAMED “HAWAIIAN PUNCH JELLY BEANS!!??”

It doesn’t really matter, as one interesting and one good flavor isn’t nearly enough to warrant me buying these again. In fact, I took them to work, and across the board, everyone liked the red, and no one liked anything else.

To be fair though, the Jelly Bean game is a tough one. In my world, there’s very few players. Mostly, there’s Jelly Belly and then there’s everyone else. These prove that point. However, there are a couple of new kids to the party, one of which I’ll review next.

For now though, let’s all just agree to keep Hawaiian Punch as a distant, semi-interesting memory. If you’re gonna bean-out this Easter, then get your ‘Belly on. I recommend the sours, the fruit mixes, and generally everything they make. I cant get behind the coffee/chocolate-y flavors though, those freak me out.

Would I Buy These Again? : No possibility