Red Vines – The Candy That Started It All…

They'll always be a place in my heart & pantry for these things. 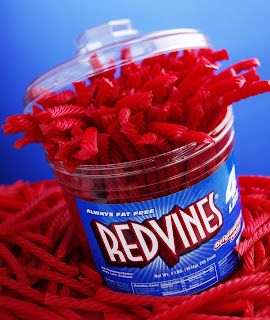 Everybody, quick- get into the way back machine. Everyone comfy? Dial it back to 1993. Ready? Good, then let’s begin.
In 1993, fellow Guru Matty and myself were single, kid-less, and living together on 12th Avenue in San Francisco. Not fully aware ourselves that we were hardcore candy addicts (it took a few more years), we were semi-employed, grungy, musician types enjoying life. We weren’t stupid though. We’d go to Costco occasionally, and when we did, we’d pick up a tub of the American licorice classic, “Red Vines”.
Pretty quickly, we realized that they’re way too soft when fresh. Some people like that, we didn’t. No “chew” to them. So, one day, …we left the lid off the tub. And the rest is history.
We didn’t know it at the time, but (for us) we had just invented a candy aging machine. Sure, it was a ghetto candy aging “machine”, but it worked-after just a few weeks, the Red Vines changed from soft to hard, chewy, and delicious. Of course, this has cemented Red Vines firmly in my heart as an old stand-by: a slam dunk for the movie theater: just plain good.
Before the licorice purists of the world cry foul, let me just say that I get that this isn’t really licorice. “Licorice” is black. Black, salty, chewy, yummy. And I dig that shit. But Red Vines is something different that I’ve been eating since…well, since I don’t know when. A friggin’ long time.
Who remembers, in the movie theater, biting the ends off a Red Vine and then using it as a straw in your drink? I did it last week. I know I’m almost 40, but dammit, that’s good shit!
The flavor profile of Red Vines is pretty simple-it’s just a sweet nondescript flavor. They taste like Red Vines, dammit! But for me, it’s about the chew, the process, and the fun. I just popped one in my mouth, and it’s delicious. Long live Red Vines!
Bottom Line : Red Vines are an American classic. If fresh, not so great (for me). But aged? It’s a whole new world.